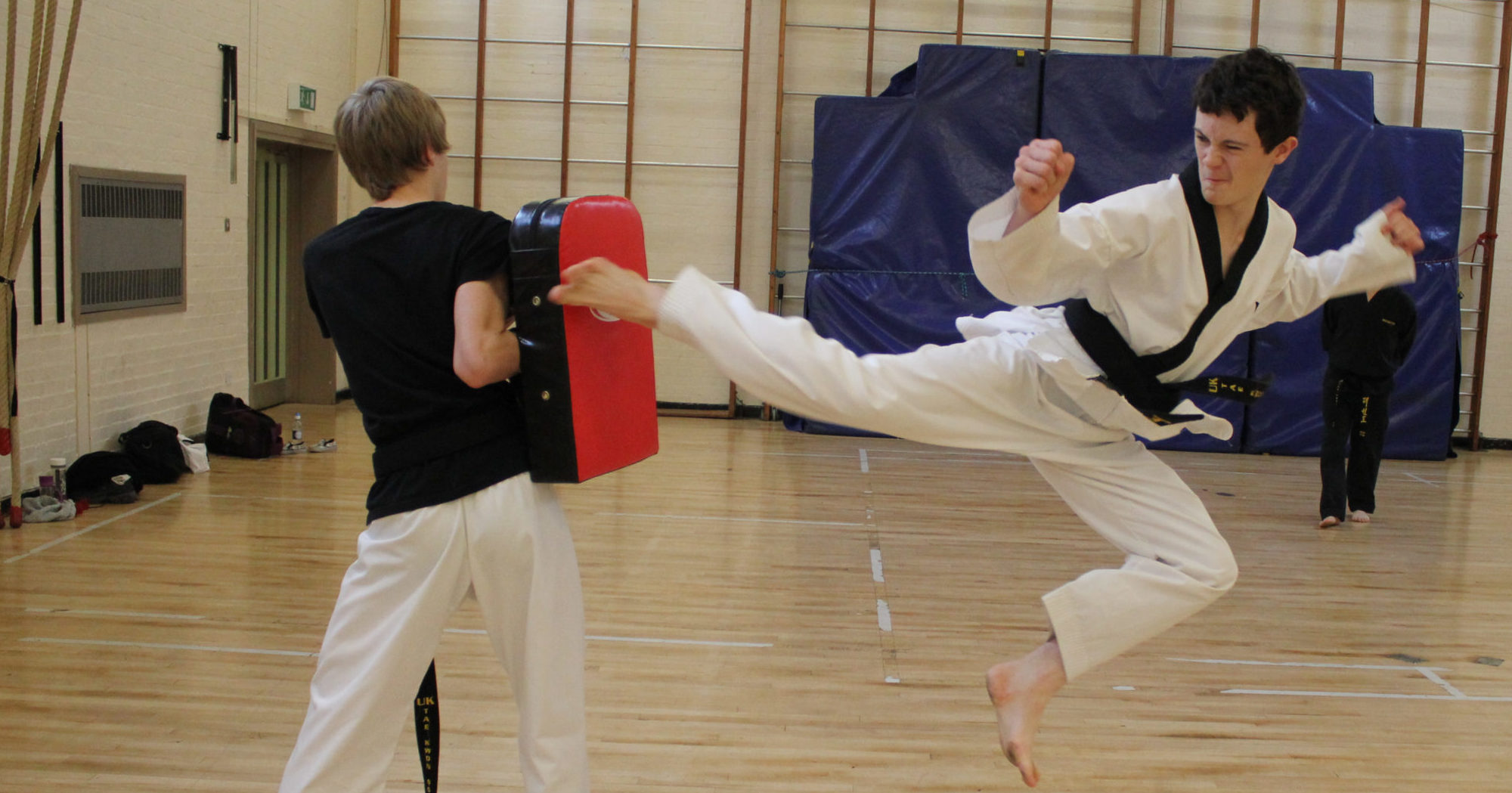 Literally means “Heaven & Earth”. In the Orient it is interpreted as the creation of the world or the beginning of human history. Therefore, it is the initial pattern performed by the beginner. This pattern consists of two similar parts; one to represent the Heaven and the other the Earth.

The word Chon in Korean means Heaven & the word Ji means Earth, combined this can be interpreted as meaning creation (the creation of the universe & beginning of life). This theory can be largely attributed to the Chinese classic, the I Ching –the “book of changes”. This text explained the processes of growth & change in the natural world. The fundamental philosophy of this ancient text is the need to retain balance & harmony within all aspects of life. This is known as the Um-Yang relationship (or Yin-Yang in Chinese).

The symbol of two interlocking “commas” is the Neo-Confucian symbol called the t’aeguk & this symbol can be found on the Korean national flag, the T’aeguk-ki . The flag also has further symbolism attached to it in the trigrams (the different 3 bar symbols) surrounding the Um-Yang roundel. These also originate from the I Ching.

Dan Gun is named after the holy Dan-Gun, the legendary founder of Korea in the year 2,333 B.C.

It is said that in the time of the mythical Chinese Emperor Yao, the supreme deity Hwanin allowed his son, Hwanung, to descend to Earth. This he did at T’aebaek-San (near modern day Pyong-Yang). The legend has it that he overheard a bear & a tiger talking “would that we might become men”. He promised to turn the creature who could complete the challenge that he would set, into a human. The task was to live in a cave for 21 days & to eat only garlic. The tiger, due to its fierceness, could not complete the challenge, but the bear, with greater patience & faith, was able to finish Hwanung’s test. He kept his promise & turned the bear into a beautiful woman, Ungnyo. The two were to have a child, this child was called Dan Gun (this name means “mountain birch ruler” to represent his birth underneath a Pak-Tal tree). Dan Gun eventually founded the Korean nation & led his people to reside on Mount Paekdu.

In what is now North Korea on the Chinese border, Korea’s highest mountain, Paekdu-San (White Headed Mountain) exists. This is an ancient volcano & at its peak a crater lake exists, named Lake Chon.

Do San is the pseudonym of the patriot Ahn Chang-Ho (1876-1938), who devoted his entire life to furthering the education of the Korean people and promoting its independence movement.

Ahn Chang-Ho became a prominent member of the Independence Club, an organisation established by reformists fired by feelings of nationalism & a desire for social change. In 1899 he founded a school in his hometown of Kangso, before leaving for America. There he rallied Korean ex-patriots before returning to his homeland & taking part in the forming of the secret nationalist society, Sinminhoe, in 1907, with the purpose of promoting the patriotic education of the people.

After the 1st March independence demonstrations of 1919 he joined the Government-in-Exile in Shanghai, but soon left due to the political squabbling of it’s leaders. In 1926 he was arrested by the Japanese, when caught with Manchurian freedom fighters. He was released early due to ill health but was again arrested in 1937, he died a year later.

Won Hyo was the noted monk who successfully endeavoured to bring Buddhism to the peoples of the Silla Dynasty before his death in the year of 686 A.D.

Won Hyo (617 A.D. to 686 A.D.) is the best-known name in Korean Buddhism. At the age of 28 he became a monk & spent many years trying to unify the various schools of Buddhism that existed at that time. Later in life he spent his time teaching, declaring that Buddhism & achieving enlightenment was for all classes of people & not just for monks.

Won Hyo was invited to the royal court of King Muyol where he met & fell in love with a widowed Silla princess & they had a son called Sol Chong, who became a trusted royal advisor.

One story about Won Hyo recalls how, on a trip to China to study, he found a cave to sleep in over night. In the cave he found a cup which he used to drink from. In the morning he saw that the cup was in fact a human skull & realising that the revulsion that he felt was purely a matter of mind, he saw that he had no reason to travel to China & returned home. His writings were highly regarded in both China & Japan.

This is the pseudonym of the great philosopher and scholar Yi l (1536-1584) who was nicknamed “The Confucius of Korea”. The 38 movements of this pattern refer to his birthplace on the 38° latitude and the diagram represents the Chinese symbol for “scholar”.

As a philosopher Yi I is regarded second only to Toi Gye. He was an original political thinker & educator. His brush name (Yul Gok) means “chestnut valley”. His mother was a very educated woman & a skilled painter & poet. After his mother died he went into the Diamond Mountains with thoughts of becoming a Buddhist. In 1556 he returned home & moved to Seoul, there he rejected his Buddhist teachings & took up Neo-Confucian philosophy, partly because it embraced political & social activity. Four years later at the age of 22, he stayed with Toi Gye for a short period at his retreat in Tosan.

He then entered into the government service & rose steadily up the ranks. In the last 4 years of his life he held the highest posts in the land. He proposed new policies in taxation, education & defence of the realm. He advised on maintaining a standing army of 100,000 men but his advice was not heeded & 10 years later the Japanese invaded & faced virtually no opposition (the 1592 Imjin Wars).

This pattern is named after the patriot Ahn Joong Gun who assassinated Hiro-Bumi Ito, the first Japanese governor-general of Korea, known as the man who played the leading part in the Korea-Japan merger. There are 32 movements in this pattern to represent Mr. Ahn’s age when he was executed in the Lui-Shung prison in 1910.

Ahn Joong Gun was trained from an early age in Chinese, horsemanship & archery. After the protectorate treaty was signed in 1905 (giving the Japanese almost ultimate control over the Korean government & people) Joong Gun fled Korea in disgust. Based in Vladivostok he set up a volunteer army & fought his way back into Korea with sporadic guerrilla raids. On 26 October 1909, disguised as a Japanese, he made his way to the platform of the Harbin railway station where he shot & killed the Japanese Resident-General of Korea, Prince Hiro-Bumi Ito. He was immediately arrested & was imprisoned & tortured at the Lui-Shung (Port Arthur) prison. During his imprisonment Joong Gun left his indelible mark on the wall of his prison cell with a single line of calligraphy (written in his own blood, after cutting off a finger) that showed his love for his country. It simply said; “The best rivers and mountains”.

Toi Gye is the pen name of the noted scholar Yi Hwang (16th century), an authority on Neo-Confucianism. The 37 movements of the pattern refer to his birthplace on the 37° latitude & the diagram represents the Chinese symbol for “scholar

Born in 1501, Yi Hwang was Korea’s greatest philosopher, renowned as a genial, modest & amiable man. At the age of 34 he had passed the exams to enable him to hold a position in the civil service. This was held in high esteem, as this was not usually completed until a person was much older. He held 29 official posts in government. In 1549 he retired from public service, justifying his brush name Toi Gye which meant “returning to the valley”. In 1558 he wrote a short work titled Chasonhuak. This became very influential with Japanese intellectuals after its introduction to Japan in the 17th century. Even after 200 years later (19th C.) his work was still very popular amongst the Japanese & his influence can still be felt today in modern Korea, China & Japan.

This pattern is named after the Hwa Rang youth group, which originated in the Silla Dynasty in the early 7th century. The 29 movements refer to the 29th Infantry Division, commanded by General Choi in 1953 where Taekwondo was developed into maturity.

The 29th Infantry Division of the Republic Of Korea (ROK) Army was created in 1953 by Major General Choi under orders by the ROK Army Commander-in-Chief. This was to be based on Cheju island in the town of Mosulp’o. The division was nicknamed the “Ick” division or the “fist division”. The division emblem was of a clenched fist superimposed over the background of the Korean peninsular. This symbolised the smashing of the 38th parallel, therefore reuniting the North & South; unifying Korea after the division of the country. General Choi set out & put in place Officers & NCOs who were teachers of the martial arts who then instructed the soldiers in unarmed combat (initially Tang Soo Do, later Taekwon-Do) as well as their normal military training. Very quickly the unit became renowned for its prowess.

The Oh-Do Kwan was founded here. The name derives from a statement by Confucius “Oh-Do-Il-Kwan-Zi”; My principle is to master one thing.

This was the name given to the great Admiral, Yi Sun-Sin of the Yi Dynasty. He was reputed to have invented the first armoured battleship (the Kobukson) in 1592,

This pattern ends with a left handed attack to symbolise his regrettable death, having not had the chance to demonstrate his unrestrained potential, which was checked by his forced reservation of loyalty to the king.

In 1591 Yi Sun Sin, a high-ranking military official was promoted to Left Admiral of the Korean fleet. Realising that the likelihood of war with Japan was inevitable & that the key to the successful defence of Korea was the mastery of the southern seas, he set about building up his fleet & training his men. The following year he developed the armoured battleship, the Kobukson; the legendary “turtle ships”.

The Kobukson was about 30 metres long, carried up to 160 men & had a concave roof to protect the soldiers & oarsmen. This was covered by layers of iron plate, to provide protection against arrows & gunshot. Cannons were arranged to give all-round offensive ability, iron spikes covered the ship to prevent boarders & a dragon’s head was installed at the front of the ship. This was to blow out plumes of smoke; this provided cover & to instil fear into their opponents.

Quickly establishing mastery of the seas & contributing greatly to the failure of the Japanese invasion in 1592, Yi Sun Sin became an enemy of jealous rival, Won Kyun, the Right Admiral of the fleet. When Yi Sun Sin was made Commander-in-Chief, Won Kyun seized the opportunity to accuse Yi of not acting upon an order that came from above. Yi was summoned to the Royal Court, put on trial & was condemned to death. An influential member of the court managed to overturn this decision but the Admiral was reduced to the rank of a common foot soldier.

In 1597 the 2nd invasion occurred & Won Kyun lost the Korean fleet & was captured & beheaded by the Japanese. Yi Sun Sin was reinstated as Admiral & once again succeeded in destroying the fleet that was re-supplying the Japanese troops, with a small fleet of turtle ships. In 1598 at the age of 53, Admiral Yi was killed in battle. His dying words were said to be: “Do not let the rest know that I am dead, for it will spoil the fight”. It was largely due to the successes of Admiral Yi that the Imjin wars ended in 1598 & the Japanese returned home, their commander, Toyotomi Hideyoshi, dead.

The name, Choong Moo, was given as a posthumous, honorific, title. It means “Faithful Warrior”.